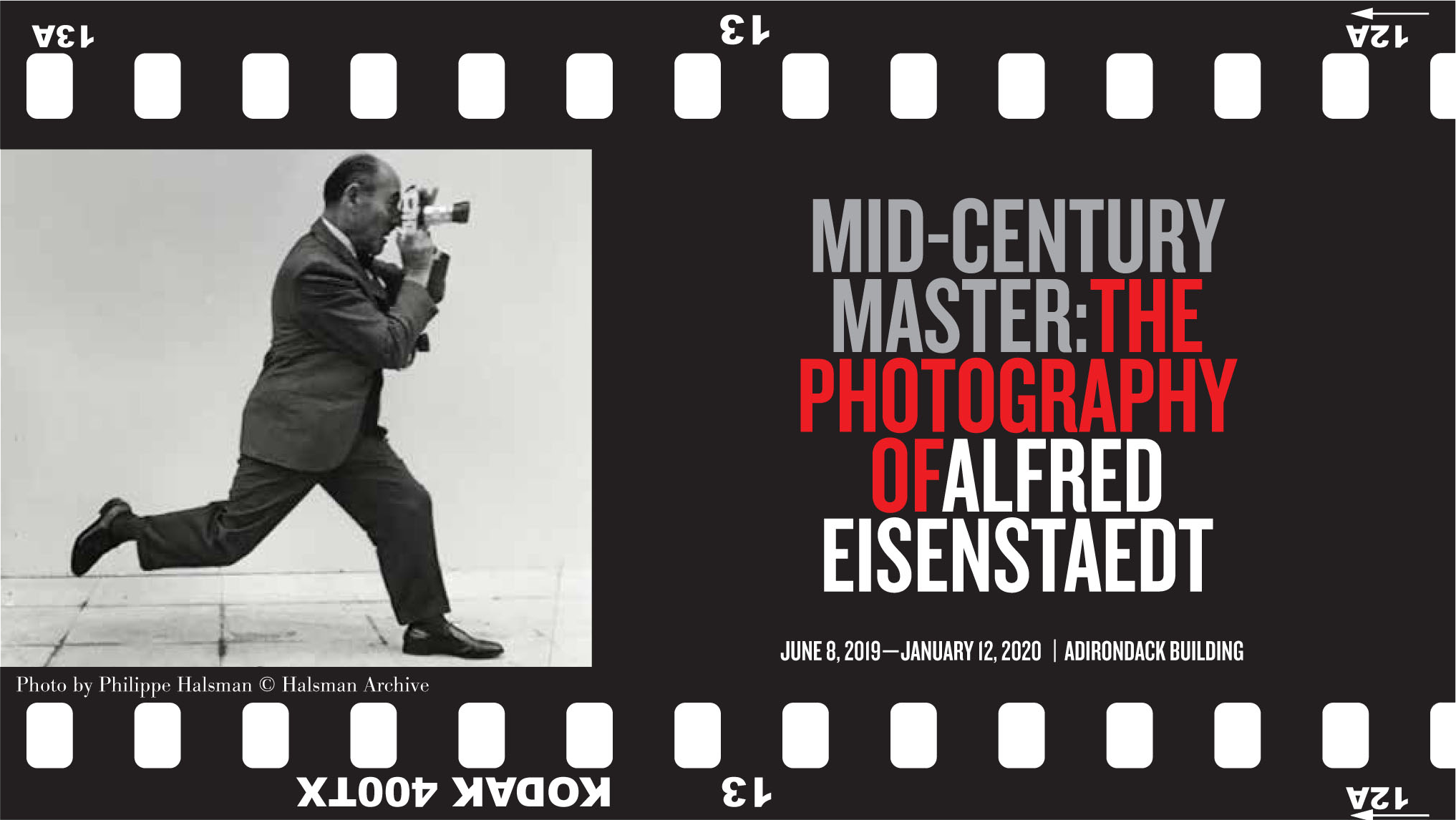 Famous photographs of Marilyn Monroe, Jacqueline Kennedy Onassis, and more join Marjorie Merriweather Post for a candid glimpse at mid-20th-century life and the era’s most memorable personalities and moments

Washington, D.C.—The special exhibition Mid-Century Master: The Photography of Alfred Eisenstaedt, on view at Hillwood Estate, Museum & Gardens from June 8, 2019 through January 12, 2020, will feature nearly 50 works from photographer Alfred Eisenstaedt, focusing on his timeless images of life in the mid-20th century and the era’s most celebrated figures, including Hillwood founder Marjorie Merriweather Post.

A pioneer of the candid style, Eisenstaedt was renowned for his ability to capture his subjects in unguarded moments. According to Eisenstaedt, “it’s more important to click with people than to click the shutter,” reflecting his unobtrusive, relaxed approach to working with celebrities and dignitaries. His famous informal portraits featured world leaders, politicians, philanthropists, scientists, artists, actors, writers, and more. When he photographed Marjorie Post for the November 5, 1965 issue of LIFE he cemented her place among the most notable people of the 20th century.

“Marjorie was already well-known as a social figure, businesswoman, and philanthropist when the LIFE issue hit the stands,” explained Hillwood executive director Kate Markert. “But this eighteen-page spread, capturing her in genuine moments, really showcased her generous spirit and gracious way of life.” Featuring her life in and about her three properties at the time—Hillwood, Camp Topridge, and Mar-a-Lago—the piece brought an abundance of fan letters to Post’s various addresses as the public discovered Post to be both exquisite and approachable. Mid-Century Master will present images from this issue along with other Eisenstaedt photos that documented the personalities, events, and experiences of the time.

Born in present-day Tczew, Poland (formerly Dirschau, West Prussia), Alfred Eisenstaedt (1898-1995) first picked up a camera as a boy, though he did not become a professional photographer until the 1920s. He traveled across Europe, documenting its cultural and political landscape for the Associated Press and as a freelancer before immigrating to the United States in 1935. Joining LIFE as a photojournalist at its inception under Henry Luce in 1936, Eisenstaedt remained at the publication until 1972, the final year of its weekly publication. One of LIFE’s most notable photographers, Eisenstaedt had 90 photos featured on the cover of the magazine and over 2,500 of his photo stories published. Among these photo stories was the Post feature in 1965.

“Though lesser-known among modern photographers, Alfred Eisenstaedt was behind the lens of some of the most memorable photos of the 20th century,” said Megan Martinelli, assistant curator of apparel, jewelry, and accessories at Hillwood and curator of the exhibition. “His masterful ability to capture the essence of a fleeting moment left an indelible mark on the field of photojournalism. Mid-Century Master will display the legendary work of Eisenstaedt, offering an exploration into life during the mid-20th century and his role in documenting not only Marjorie Post’s lifestyle but also the collective zeitgeist of the last century.”

The exhibition will be organized into five sections, opening with an introduction into Eisenstaedt and moving into his career shift from soldier to salesman to LIFE photographer. Eisenstaedt sold his first photograph in 1927 and continued to do so until what was once known as “Project X” was fully established as LIFE and beyond.

The next section will reveal his ability to bring the world to the people, capturing important moments in history. With his small Leica camera, he was a fluid presence, seemingly everywhere.

Eisenstaedt’s portfolio featured portraits of 20th-century leaders and luminaries such as the Duke and Duchess of Windsor, Albert Einstein, Marilyn Monroe, Ernest Hemingway, Jackie Kennedy, and Frank Lloyd Wright, all on view in the exhibition alongside photos from his sessions with Post. The exhibition will give visitors the opportunity to view life in the mid-20th century across all social stratospheres, preserving moments in time for world leaders, celebrities, artists, scientists, and everyday Americans.

The exhibition closes with an examination of Eisenstaedt’s technical prowess as a photographer—how he composed each shot. Here, photographs will be displayed in subsections based on style, including repetition and patterns, changing perspective, mirrors and reflections, contrasting light and dark, illuminating details, and playing with shadows. Important prints include Waiter on Skates (1932), Farewell to Servicemen at Pennsylvania Station (1943), and Drum Major of the University of Michigan Rehearsing (1950).

Megan Martinelli became Hillwood’s assistant curator of apparel, jewelry, and accessories in January 2018. Previously, Megan was a research assistant at The Metropolitan Museum of Art’s Costume Institute, where she contributed to internal object assessment research and assisted with exhibitions including “China: Through the Looking Glass” (2015) and “Manus x Machina: Fashion in an Age of Technology” (2016). Before joining The Met, Megan curated an exhibition titled “The Other White Dress: Non-Wedding Dresses of the Twenty-First Century” (2014) at the University of Rhode Island’s Historic Textile Gallery and contributed to “Artist, Rebel, Dandy: Men of Fashion” (2013) at The RISD Museum of Art.  Megan holds a MS in historic textiles and costumes from the University of Rhode Island and a BA in English literature from Providence College.

Mid-Century Master: The Photography of Alfred Eisenstaedt inspires an array of programs and events throughout the presentation of the exhibition.

An opening benefit celebration will be held on Tuesday, June 4, 2019. Inspired by Post’s grand affairs at Hillwood, the evening will include cocktails and a glamorous dinner on the Lunar Lawn in honor of Post’s singular style and in support of Hillwood’s mission to share her cultural treasure with future generations.

This summer, a three-part film series featuring three documentaries on other well-known photographers will explore the ways photographers define visual history. Films and dates are:

In October, a four-part lecture series will delve deeper into the world of photography. Speakers, dates, and subjects are:

When art collector, businesswoman, social figure, and philanthropist Marjorie Merriweather Post left to the public her northwest Washington, D.C. estate, she endowed the country with the most comprehensive collection of Russian imperial art outside of Russia, an exquisite 18th-century French decorative art collection, and 25 acres of serene landscaped gardens and natural woodlands. Opened as a public institution in 1977, today Hillwood Estate, Museum & Gardens offers a gracious and immersive experience unlike any other. Highlights of the collection include Fabergé eggs, Russian porcelain, Russian orthodox icons, Beauvais tapestries, and Sèvres porcelain, and Post’s personal collection of apparel, accessories, and jewelry. Thirteen acres of enchanting formal gardens include a Japanese-style garden, rose garden, French parterre, and a greenhouse full of orchids.