Learning To Do Street Photography

Landscape photography is a wonderful photographic genre. It’s what most people graduate to when they’re first attracted to photography as a serious art form. Landscapes have the distinct advantage of staying still while you shoot pictures of them. There are other satisfying kinds of nature photography. Birds don’t stay still, but they rarely complain if you shoot pictures of them, and pictures of birds can be beautiful. History, encapsulated in abandoned or very old buildings, can be another photographic winner, and like landscape, history stays still while you shoot it. Landscape and history have the added advantage that you can come back time after time until you get exactly the light you’re looking for.

Don’t forget if you are a Siler or Gold member you can click on an image to see it larger.

But eventually, if you’re a photographer interested in transferring emotional responses to others, you may come face to face with the power of street photography. In the end, people and the things they do are more interesting to other people than are lovely landscapes or abandoned structures. At some point, you may be drawn to the idea of photographing people doing what they do.

How Do You Learn To Do Real Street Photography?

Street photography has nothing to do with streets, though in the days when it began, film and lenses were slow enough that you probably needed to be out on the street to do it effectively. You need to understand what street photography really is, and you’re not going to learn what it is by reading about it or by instructions from an online class.

Get a book by Henri Cartier-Bresson and study it. As far as I’m concerned, Henri was the guy who defined street photography, though there are those who’d disagree with me, and it’s true that Andre Kertesz and Brassaï were doing something similar a bit before Henri. Look particularly at Cartier-Bresson’s early photography. Henri became a photojournalist after World War II, and as I’ll explain later, photojournalism is not the same thing as street photography. Then buy or borrow books by Andre Kertesz, David Seymour (Chim), Robert Doisneau, Willy Ronis, Brassaï Walker Evans ,Elliott Erwitt,  Mark Riboud, Garry Winogrand, Helen Levitt , and Robert Frank and study them. These are a few of the people – probably the principal ones – who developed the art genre we know as street photography. Then there’s a book, an all-time favorite of mine: Bystander: A History of Street Photography by Colin Westerbrook and Joel Meyerowitz, which covers the history of street photography quite extensively.

So let’s look at some of the things that are supremely important if you’re setting out to do street photography.

You need to be thoroughly familiar with your camera. You won’t have time to fool around with aperture, shutter speed or ISO. Your fingers need to handle the mechanics instinctively, the same way you shift gears instinctively when you’re driving a stick-shift car.

Even more importantly, you need to develop an instinctive sense of composition. When you’re doing street, you’ll almost never have more than three seconds to frame, focus and shoot. Sometimes you’ll have even less. Yes, you can crop later in order to improve the framing, and there’ll be times when you can’t avoid doing that. Cartier-Bresson refused to crop, but he was a trained visual artist before he took up photography. Still, when he made one of his finest street shots (Cardinal Pacelli) he was in a crowd, had to hold the camera over his head, and later cropped.

He was lucky. You’re unlikely to be so lucky. Learn to frame properly. How do you do that? Two things help. First, study the pictures in the books I’ve listed above. Many of them are framed in a way that adds to their impact. Second, shoot and shoot and shoot, framing your shots quickly the way you think they should be framed, then get them onto your computer and see whether you were right. These test pictures don’t need to be street shots. A canon of composition like the rule of thirds applies to landscape too.

Once you’ve got your quick framing under control, work on being insignificant. Those of you old enough to have listened to the radio show, “The Shadow” remember that the Shadow was invisible because he could “cloud men’s minds.” To some extent, you too can learn to cloud men’s minds – possibly even women’s minds – by being quiet and insignificant. If your normal temperament is quiet and insignificant, you’re home-free, but if you’re an outgoing extrovert, you’ll have to work on it. As a street photographer, the last thing you want is attention.

Always carry a camera. You want people to get used to you as “that guy with the camera.” You can do street photography with a cell phone, but a camera has features cell phones, at least at the moment, don’t have and that can make street photography easier and quicker. Find a camera that’s small, black, and quiet. There are many out there that satisfy these requirements.

Having equipped yourself with a camera and having learned to focus and frame quickly and smoothly, you need to think about subject matter. You can’t plan your subject matter the way you can when you’re shooting landscape, though Robert Doisneau sometimes did setups with models. His most famous picture, “The Kiss by the Hôtel de Ville” was that kind of thing. He hired two models for the kiss, and when the picture became wildly successful, the models tried to shake him down for more money. https://www.artsy.net/artwork/robert-doisneau-le-baiser-de-lhotel-de-ville

But the heart of street photography is the accidental catch — the grab shot. To do street photography well, you need to become what Baudelaire called a flâneur. The French word flâneur generally is applied to a stroller or a loafer. Successful street photography doesn’t require that you stroll or loaf, though strolling in a busy part of town may bring you some worthwhile shots, but it requires you to observe the world as if you were strolling through life, always ready to grab an unexpected illustration of life’s meaning. 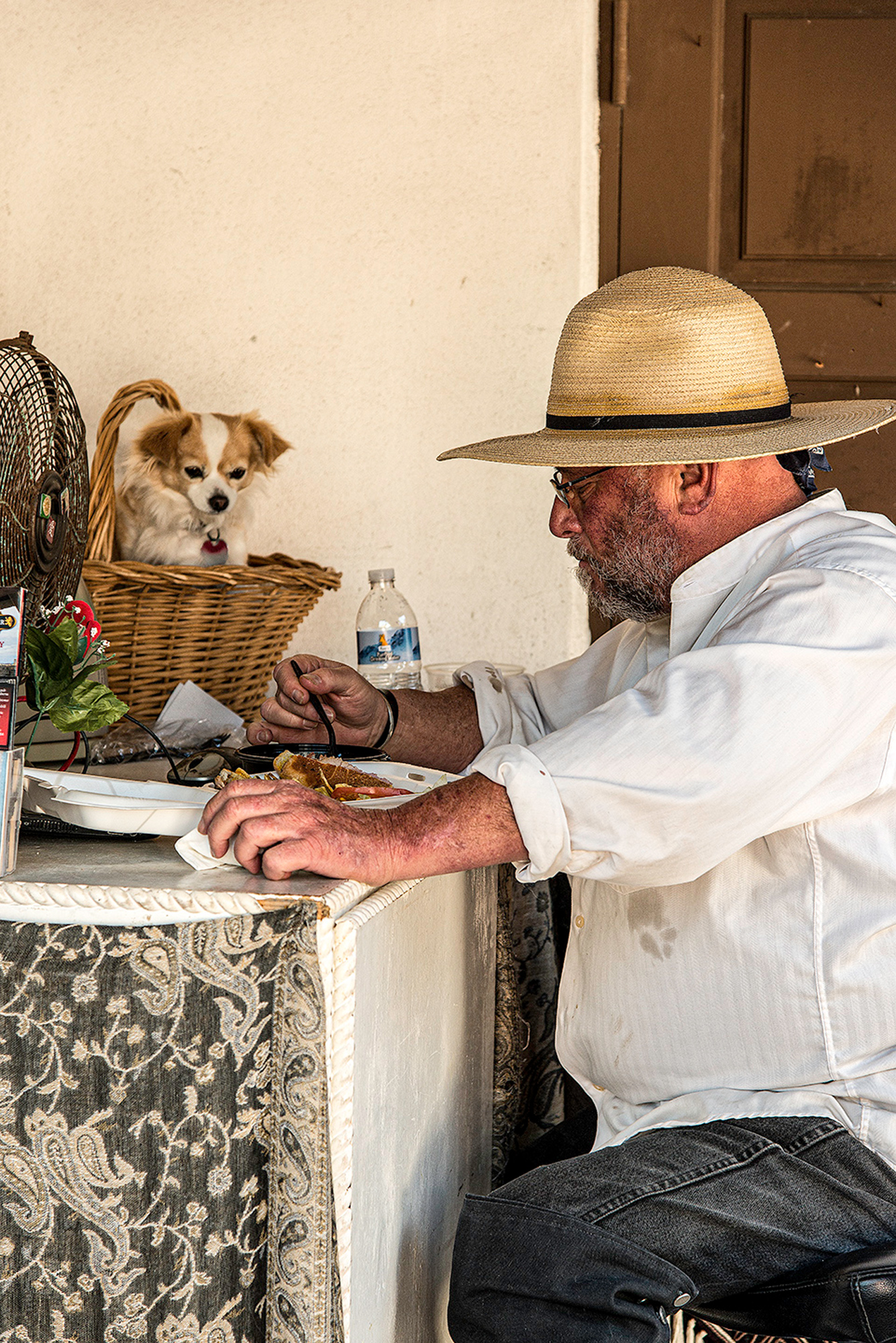 I'm now 92. I spent 26 years in the United States Air Force. Flew fighter-bombers in Korea and was there when the war ended. Ten years later I was commander of a radar site in the Mekong delta. Nine years after that I was commander of the group that contained all the radar sites left in Southeast Asia during the Cambodian operation. I was there when that one ended. After I retired from the Air Force I began doing software engineering, and did that for another thirty years. I became a photographer at 13 when I built a darkroom in my parents' fruit cellar. When the war ended in Korea I started going downtown in Taegu, shooting pictures mostly of people. I was doing street photography, though I didn't know it at the time. Street has been my favorite thing ever since. You can see it all on my web site. russ-lewis.com.