Under the watchful eye of Orion, I slip under the cover of darkness into the January morning air and the always welcoming cold car!!!

Ahead lies a 3.5 hour drive across Ireland, a hairy reverse down a slipway onto the small but friendly Arranmore Ferry, for the short 20 minute sailing to the Island of Arranmore.

Situated in North West Ireland, Arranmore Island (Árainn Mhór in Gaelic) is the largest Island in County Donegal. With a permanent residence of around 470 people, it is a wildly beautiful place, and recently launched a “coming home” campaign to attract new permanent residents. That campaign has seen interest from across the globe, and as I descend the ramp of the ferry it is not hard to see why.

With winter still locked in, the Island was quietly sleepy. Accommodation and places to eat were in short supply. Thankfully the host of my glamping pod advised me to bring my own food!!

With less than 24 hours to spend on the Island, I had spent hours pouring over Ordnance Survey maps, Google and Apple Maps (surprisingly good resolution in this area) and knew exactly where I wanted to go to.

Shifting gear, turning right I ascended the main road to the lighthouse. Clouds hung low, a ghostly coastline drifted in and out of view. Brief glimpses of sea-arches and towering headlands crafted by the hand of pounding Atlantic were enough to get the creative juices flowing.

My first stop was a location beside the lighthouse on the Island. Here, I followed the lichen-covered stone wall down to the cliff edge. Against a backdrop of truly stunning cliffs, gulls danced on the stiff breeze, while below precarious narrow steps dared me to descend to the heaving ocean below.

Descending into the swirling sea-spray below, I gingerly follow the steps to the Atlantic below. With a tripod unfurled, I locked my Canon 5DMK4 had my well used and much abused Canon 70-200 in place. Through the viewfinder, waves crashed over the distant shark tooth shaped rocks, mist rolled across the distant cliffs, and the landscape took on the feel of a Game of Thrones set. 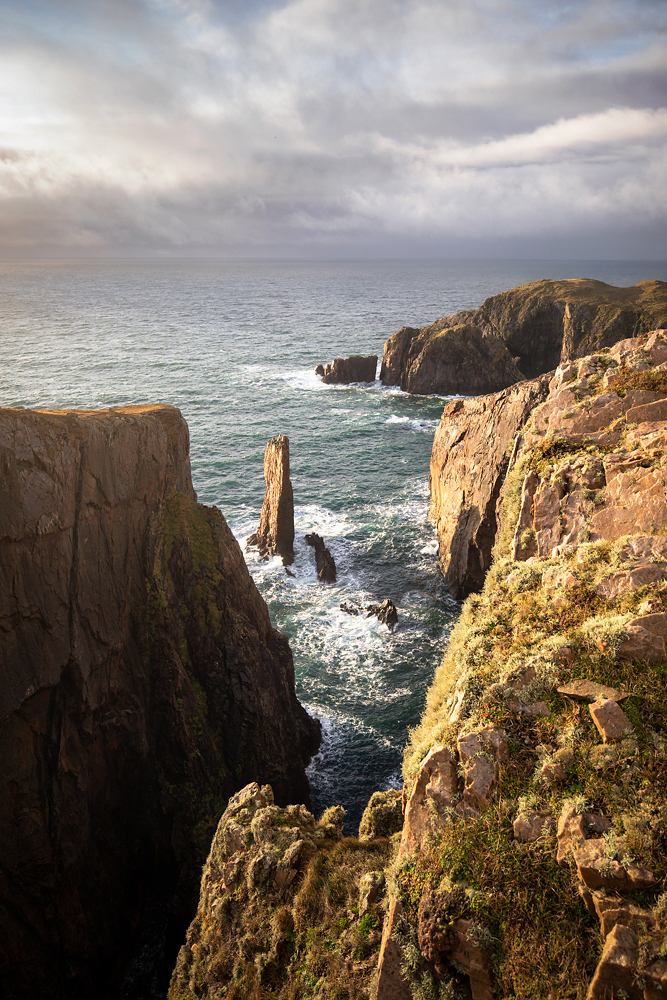 Fighting a losing battle to keep the front of the lens dry, I made frequent short bursts of the shutter, before wiping dry the front element of the lens. A process I repeated numerous times over a 10 minute period.

Switching to a wide-angle lens, I make two exposures at the foot of the cliffs in the hope of capturing an image that hopefully gave a sense of scale and grandeur.

After a lung-bursting ascent back up the cliff face. It was a short 20-minute drive, and a 2.5km hike across a rocky ground and open bog to a section of the Arranmore coast, which was home to a stunning sea-stack.

On arrival, the light was momentarily magical, only to disappear as the heavens opened, giving me the first of many soakings.

Here, all alone, on a remote headland, with no one for miles around, I walked up and down and around the headland, sketching compositions with my iPhone, and shooting some footage for my youtube channel.

Settling on two compositions, I set up, and as all landscape photographers do, waited!!

One hour went by and the light remained drab, two hours went by and as the wind gained strength, small chinks of light appeared on the horizon, allowing fleeting moments of light to paint the coastline before disappearing again.

Thankfully I managed to grab a couple of frames, before the clouds rolled in and darkness set in.

That evening, as my jet-boil, boiled water for my dinner, I sat back listening to the stream that rolled by my glamping pod. My apple watch tapped me to tell me I had been a good boy and had met my exercise goals, while my mind raced with thoughts of “when can I get back here again” I had seen so many things I want to photograph.

Shortly after 8 Pm, and with images safely transferred to a mac book, I grabbed a torch, and wandered up the rain-sodden country road to a local pub. On arrival, the place was empty. Us Irish like to talk, and within a few minutes the owner had managed to drag my story and the reason I was here out of me. As I spoke, she nodded, said I was mad and poured me a pint of beer. Three pints later, as I sat by a crackling fire she joined me. Supping a beer, she sipped a Gin. “You know”, she said, if you like this place, you should check out these places, and proceeded to draw a map of the Island, marking some places I had known, others I had never heard of. Magical moments like this, with people I had never met is what makes these little photographic trips.

The following morning I woke shortly before 6 a.m to the sound of rain hammering down on the wooden structure that was my glamping pod.

With the rain ruining my morning photography plans, I sent the captain of the boat an SMS to see if there was any chance of getting on the 7.45 am early boat back to the mainland. “No problem” came the reply.

90 minutes later, the blue boat slipped out of the harbour into early morning blue hour. With a misty rain falling and the chill of the morning tickling my face, I stood on top of the open deck as the Islanders took shelter on the ferry deck below.

This Island which I had spent less than 24 hours on had got under my skin. Plans are afoot for a return visit, my own coming home so to speak.

If you want to see more of Arranmore, check out the youtube video I made while visiting the Island,

A photographer for over 20 years, I run workshops in the West of Ireland, which have attracted visitors from all over the world. I enjoy nothing more than getting Off the beaten track, in all seasons and exploring the lesser seen photographic gems that the Irish landscape has to offer.