Home > Articles > The Lensmen Of The Lake

The Lensmen Of The Lake

A few years ago I came across an image taken by Tom Jones, @tomjonesfoto on Instagram, of the sun setting behind the Chicago skyline captured from the Indiana Dunes. I lived in Chicago for many years and never recalled seeing that perspective of the city. The image was burned into my brain and something I knew I needed to try and achieve on my own.

This Was The Year

Due to the pandemic, my typical busy summer was a bit slow, to say the least. My family and I planned to visit my sister and her family for the weekend in the far north Chicago suburbs and on the way home I ended up making a rather last-minute plan to camp at Dunewood Campground for a couple of nights. From that location, we would only be a short drive from the beach where we could capture that one shot I had etched in my memory bank.

That Sunday morning, I met up with one of my best friends at his home in Arlington Heights, he’s not a photographer per se but he certainly has an adventurous spirit and whether he admits it or not he has a great eye for photography. Over the past 15 years, he and I have road-tripped all over the country together. His name is Jim Braniff, he is a firefighter in Arlington Heights and also a damn good cook.

After a day of juggling children, packing, and meal prep we hit the road for the dunes. The goal was to arrive at the campground around 4 pm to set up camp, cook a quick meal over the fire, and get to the beach for our first attempt at capturing this unique sunset.

We met up with my friends Craig Shimala, Daniel Woody and Brian Stidham all photographers with different styles and visions. Once the team was assembled, the camp was set and our bellies full we headed to the beach. Jim coined the phrase, the Lensmen of the Lake. 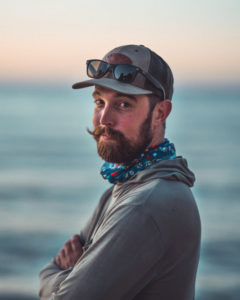 Upon arrival, we got our first glimpse of the skyline from the beach and the conditions looked very promising for what we wanted to achieve. We walked south for some time to avoid any other beachgoers. As we walked along the edge of the water until we hit private property. We ended up asking a local if we could set up outside their place for a photo. They agreed but we probably should have prefaced we’d be there for a few hours. Details.

As the sun dropped the perfect image began to line up and we all manned our cameras and waited for that special moment. CLICK CLICK CLICK.

The first day was an amazing success and even the swarm of mosquitos that arrived soon after couldn’t dampen our spirits. We were all happy to have captured this incredible moment and then one of us brought up that the comet NEOWISE was supposed to emerge shortly after sunset. So we waited with our new mosquito friends and Craig, the hawkeye of the group, was the first to locate the comet in the sky. We proceeded to snap a few more shots and really took in the historical moment. Afterward, we headed back to camp and sat around the fire thinking did that all really happen?

Now, remember, I said we gave ourselves two opportunities to get the perfect shot so having a successful first evening was like a big weight being lifted off our shoulders. The next morning we hand ground some coffee and took a day trip to Warren Dunes were we visited Green Bush Brewing Company, Beer Church Brewing and Oinks Ice Cream Shop. We also found time to toss around the frisbee, climb a few dunes, and take a much-needed dip in Lake Michigan.

All that and we were back to camp in time to make another delicious meal over the fire and hike to a different vantage point for our second evening sunset. As you noticed in the previous images the sun was not centered on the skyline when it was setting behind the city so we planned to position ourselves further south to try and get that perfectly centered shot. The only issue was that it required hiking 2 miles with our gear through a hot, mosquito-infested bog.

At the start of the hike, we were filled with optimism. The sky looked clear overhead and we were prepared for another magical moment. As we reached the clearing full of sweat and anxiety we could see immediately that there were some clouds low on the horizon and we weren’t sure how things were going to play out. For the first time, we all split up in an attempt to find a unique position. As the sun dropped the optimism of that perfect shot started to float away. However, as Kevin Raber would say, as photographers we adapt. I ended up heading down to the beach from the higher vantage point where I was posted up and it ended up becoming an incredible experience in its own right. I chatted with Jim, sipped some scotch, and snapped some different style images that I would not have captured had the conditions lined up again.

The big takeaways from this trip were not only the incredible photos but the memories made in the process. The trials and tribulations. The ups and the downs. It all added up to an amazing experience and one that I will not soon forget. I hope this article helps inspire you to go after that one shot you’ve been seeking to capture. Even if it doesn’t end up being the perfect shot you have in your head I am sure the journey will be worth it.