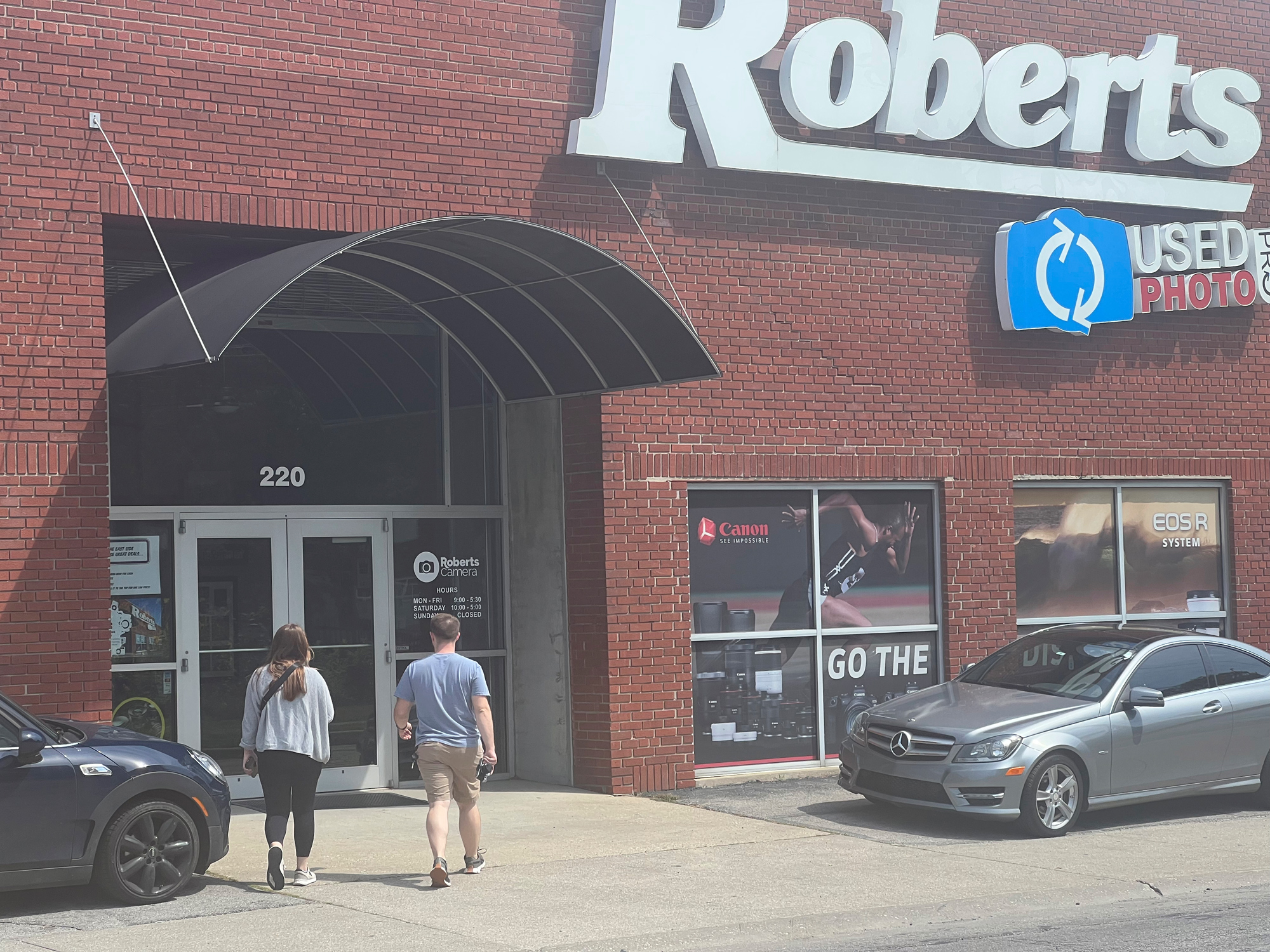 I moved to Indianapolis,  In 2002 after spending a number of years in the New York City area and living on Long Island.  It was quite a shock to move from the east coast to the Midwest.  One of the first things I did was look for a camera store that was going to be able to satisfy my lust for my never-ending GAS (gear acquisition syndrome).  There were a number of shopping center camera stores around at that time and then there was one stand-out camera store Roberts Camera.

At that time Roberts was located in downtown Indianapolis with a classic old storefront location with big neon signs.  Soon, they added another location down the street from my home at the time in Carmel, IN.

Roberts was like one of those old-time hardware stores where you could walk in and ask for something obscure or hard to get and, by some stroke of luck, they usually had it.  They were also famous for having in-stock cameras and lenses that were hard to find.

Bruce Pallman, the owner is one of that kind of hands-on guys that knows everything, and everybody and is always there interacting with the customers.  The store was cramped and if you were lucky enough to get a tour of the basement warehouse, you would be in awe of how they managed to squeeze so much into the space.  The cool thing was the staff knew where everything was.

Roberts Camera become the quiet go-to place if you needed something.  It wasn’t a big box store.  It was and is a place where you know the person answering the phone.  You talk about camera gear and chat about your favorite recipes, sports, and how the kids

are doing.  Roberts knows their customers and they know how to make customers happy.  They work really hard to find what you need and, more than anything else, deliver it at a comparable price to the big box stores.

Over the years, I have become close friends with the team there.  I always sit down with Bruce and catch up on the latest gossip and trends in the industry.  He knows everyone in the business and is respected by all the manufacturers.

Recently Bruce, who is the second generation, has turned the reins over to his daughter Meredith Reinker,  Meredith is cut from the same cloth and in the last few years has transformed Roberts into an even better place to shop for your photo needs.

They are now located in a new building with tons of space, a large retail floor, and a huge use camera division, UsedPhotoPro.  Ironically UsedPhotoPro is run by Meredith’s husband Cory Reinker and the volume of business that is done in used cameras is staggering.  I did a story, interview, and video with Cory a couple of years ago.  You can see it out a Get It Used -UsedPhotoPro.

On Saturday, August 20, 2022, Robert’s celebrated its 65th Anniversary as well as Bruce Pallman’s 70th birthday.  You might be thinking that Bruce started Roberts when he was 5 years old, but the store was started by his parents and I am sure at the age of 5 that Bruce was there learning the ropes.

Robert’s Camera is my camera store, it’s my go-to place and it’s just fun to stop in and hang out.  If you ever visit me at my studio or take part in our classroom workshops, there will always be a mandatory guided tour of Robert’s Camera included.

If you need gear, used cameras, advice, or just about anything photography associated please give them a call at 800-758-5544 and ask for Phil Gibson or Jeff Moore. You can visit their website at Robertscamera.com.

Please enjoy all the photos I snapped last Saturday when I visited the 65th Anniversary.

I hope you enjoyed all the photos and once more congratulations to Roberts Camera for 65 years of continuous service and to Bruce Pallman for his 70th birthday.  Great job.  You are my camera store.