Home > Articles > Fog Bound or Toward a Vanishing Horizon

Fog Bound or Toward a Vanishing Horizon 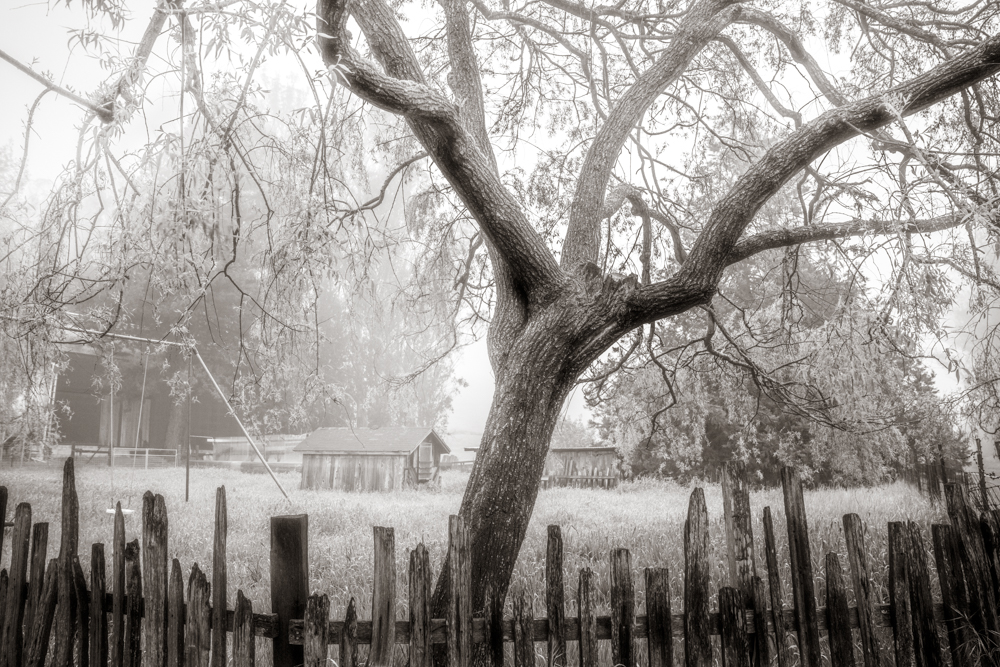 There is no still image in the fog.  Trees, rocks, livestock, and entire hillsides come and go, dancing through the visual spectrum like so many ghosts.  I am chasing them, I admit.

“What are you hunting,” asked a lady in jeans carrying a walking stick as she passed me on the road one February morning, her long white hair falling down a slender back and making me think of the 1960s except for the whiteness.   “Just good images,” I said.  But in truth, there was much more to it than that.

For several years, I have been consumed with getting as deep as possible into the fog in order to make photographs.  It is a quest of sorts, this trying to discover something not readily apparent.  I rise well before sunrise and drive to a northern California coastal region with names of Two Rock, Valley Ford, Bloomfield, Fallon, Tomales, and Whitaker Bluff.   Some are towns, some are roads and some are mere clusters of farmhouses.  My hope as I drive is that these places will be draped in white and damp enough to make the trees weep.

These excursions, pilgrimages really, have yielded a fair crop of discoveries that go far beyond anything captured on a digital sensor.  I see things I used to pass by and in the process have come to feel more settled about what I suspect I will never see with clarity.

I have been traversing this mild pastoral landscape from Petaluma to Bodega Bay for some 40 years.  Pleasant as the drive always was to the coast, I never had much reason to stop.  The shore with its beaches, ravines, crashing waters, and postcard sunsets was my destination.  The end beckoned while the means lulled.

That has changed and now the journey itself is the goal.  This time of life has become a period of greater immersion in the photographic arts, a lifelong passion interrupted and relegated to a lower place by the exigencies as I saw them of making a living and responsibly supporting a family.  I am drawn to a particular type of light and this region has become my vein of gold.

The seasons here are subtle but distinct.  They roll across estuary-carved flatlands, turning brownfields green, low-lying roads into freshwater ponds and newly shorn sheep into white beacons as they traverse the taupe hillsides. At times I feel utterly swallowed by my surroundings able to more fully understand what an artist friend once described so eloquently and simply as “this amazing fact of being alive.”  Making an image often becomes an afterthought.

During drives to the coast, I look for the signs the atmospheric conditions will be ripe.  On good days, moisture is so heavy and low that the light from streetlamps refracts into spherical shapes that seem to dangle like lampshades beneath the bulbs. The fields to my left and right are typically black and the road ahead dangerously opaque.  Driving these roads is all about intuition and patience, deciding where to turn, where to stop, and when to wait.  Good life lessons, all.

The more time I spend here the better I understand why my two middle-class suburbanite parents boldly uprooted from the Central Valley and settled here for what would be the final years of their life together.

They retired to a cottage on a sandy hillside just above the decaying ruins of an old wooden ship, a stones’ throw from the bay that gives the small coastal town of Bodega Bay its name. They loved watching the small fishing vessels return to the dock in the evenings, seagulls squawking in their wake, and colored buoys guiding them safely home. They sat quietly in a redwood hot tub on a deck that seemed to float halfway between the bay below and the stars above. “Friendly” was my father’s typically unvarnished description of the slow parade of boats returning to their slips.

That was only half the story.  They equally loved wandering the interior country roads, as I now do.  These were almost daily sojourns taken when the mood struck and with only each other to share what they saw and felt. Only offhandedly did I hear about these excursions that lacked the dramatic landmarks or vista views that would lend themselves to entertaining stories. They were immersions in the deep rather than the dramatic, in the slow rhythms of rural life and a blissful way to spend what must have seemed like days that would stretch forever.

Of course, they didn’t.  My father passed away in his own bed in 1989.  Several weeks later my mother went alone to a small restaurant they had frequented on the highway that bisects the town of Tomales.  The owner understood what it meant to see my mother sitting alone at their usual table for two and gave her a gentle kiss on the forehead before bringing coffee.

I return to this part of the world nominally to take photographs, which of course has brought a new and fuller understanding of the terrain and its seasons. I did not, however, anticipate the new ways I would appreciate the life of those who brought me here in the first place nor how this search for images would involve gazing inward as much as outward.

Seeing things pleasing to the eye is more and more about experiencing them and less about capturing a trophy of the moment.  And in more and more moments, I sense through the camera a parting of some veil only to see beyond it yet another one.  This is where I think the fog mimics the greater truth that each moment of clarity is nothing but a smiling invitation to a shrouding mist just beyond.  Come forward it says, and with that encouragement, I do.

I spent a career in journalism, mainly as a writer and editor and eventually in management positions before moving to academia where in recent years I have taught journalism and photography. All along the way, photography has been a secret obsession. I have migrated from film black and white to digital color and most recently a return to B&W. My central joy is the act of shooting itself. Being in the field as the sun comes and goes is a source of never ending enlightenment. I thank many teachers and mentors along the way, and especially Glen Fishback whose independent photography school started it all for me.