Sony is beginning to piss me off. They are destroying my camera budget. They have a lot of nerve releasing a new camera a week after they announce the A7rIV. I’m just getting over self-justifying and willing away and mental remorse about why I pulled the trigger and ordered the a7rIV and then today I get the info on the Sony RX100VII.

I have had the RX100 since version II. I love this little camera. It’s the most exceptional example of how much can be crammed into a small package. It’s my carry at all times camera. It was only last year I upgraded from the RX100V to the VI and now this. This little camera can fit in my pocket, shoot in available light, has a pop-up viewfinder, a flash tilt screen and does amazingly fast auto-focus and does excellent with video.

The one thing it never made the grade on was being a camera that could do vlogging. A number of my friends had the same issue. This camera had so many bells and whistles but was absent one big thing, a microphone port. Like many things with Sony, you would always question how they could do so much and do it so well yet forget something that would seem so basic.

You can see by the image above what my juried rig RX100VI looks like. My friend Ted Forbes showed me how to set this old rig up. This rig above allowed me to record sound on a separate device and then mate the video and audio in post. Needless to say, it was a bit awkward. Now the game has changed. Finally, after VII versions of the camera, you can plug a microphone into the camera. I now have not only a high-performance A9ish type of camera that fits in my pocket, but I also now have a vlog capable pocket camera that can be converted really easily using the shooting rig accessory that I already own and use with my RXO II.

The new RX100VII has blackout-free viewfinder shooting 20 frames per second. It also allows unlimited time length 4K video. The older 100VI cut off after just a few minutes. There is a new image stabilization making for super gimbal-like video when walking. Plus get this, super slow motion shooting at 960fps. The list goes on and on, and it also has EYE-AF. 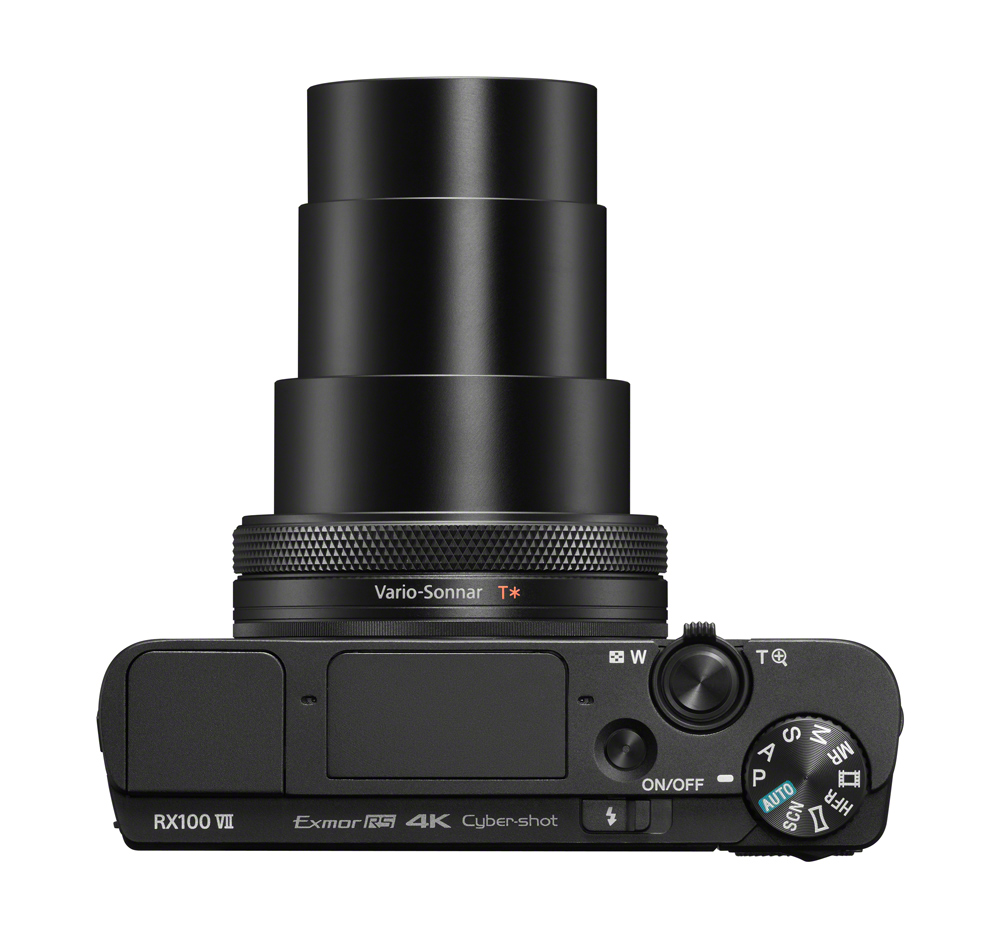 Now that this new website is up and running and we have a ton of projects we are working on this camera will work for us. I’ll be able to not only to shoot photos when needed and where needed at any time, but I will now be able to set it up to do video at the same time. We will be getting a unit soon that we can work with and test. This camera has me excited. Photography is getting more fun every day, and Sony is just knocking it out of the park.

I have posted the press release below if you are curious along with some images of the camera.

The Sony RX100vii is available from

The RX100 VII is powered by a newly developed 1.0-type stacked 20.1 MP Exmor RS CMOS image sensor and the latest generation BIONZ X image processor, which work together to deliver peak autofocus and speed performance that has never before been available in a compact camera. Flexibility of shooting is ensured by a ZEISS® Vario-Sonnar T* 24-200mmviii F2.8-4.5 high magnification zoom lens, making the RX100 VII a versatile choice for all types of shooting scenarios and users, ranging from photo enthusiasts to professionals.

“The RX100 VII sets a new standard for performance in compact cameras,” said Neal Manowitz, deputy president of Imaging Products and Solutions at Sony Electronics. “Sony will continue to drive innovation in the world of imaging, constantly pushing to empower creators with the most capable tools that allow them to realize their vision, and create like they have never been able to before.”

New Standard for AF Performance in a Compact Camera

The RX100 VII offers a world-leadingv 357 focal-plane phase-detection AF points and 425 contrast-detection AF points. In addition, thanks to a newly optimized lens drive control, the world’s fastestv 0.02 secvi AF acquisition time is realized. A major leap in AF/AE tracking performance during continuous shooting means the camera performs AF/AE calculations up to 60 times per secondii and captures fast moving action at 20fpsiii with AF/AE tracking, ensuring that each moment is shot with swift and accurate focus.

In addition, the image sensor realizes blackout-free shootingiv for a completely live view, even when continuous shooting at 20fpsiii; the same experience as the Alpha 9. The RX100 VII also debuts a new drive mode, Single Burst Shootingix, for capturing the perfect high-speed shot at up to 90fpsx in JPEG/RAW format utilizing the anti-distortion shutter. Single Burst Shootingix allows the photographer to frame fast moving action and shoot as if taking a single shot, but the camera will actually deliver seven still images taken at 90fps, 60fps or 30fps, so the user can select the perfect moment.

For the first time in a compact camera, the RX100 VII introduces advanced Real-time Tracking and Real-time Eye AF capabilities. Real-time Tracking utilizes Sony’s latest algorithm, including artificial intelligence-based object recognition to ensure that subjects can be captured with excellent accuracy, even via the touch panel on the rear screen. Real-time Eye AF, the latest version of Sony’s acclaimed Eye AF technology, employs A.I.-based object recognition to detect and process eye data in real time. This results in improved accuracy, speed and tracking performance of Eye AF for both humans and animalsvii, which allows the photographer to concentrate exclusively on composition.

The compact and lightweight characteristics of the RX100 VII (approx. 302g / 102mm x 58mm x 43mm) mean it can always be carried and has mounting flexibility that larger cameras simply cannot match.

Despite the small form factors, there are a multitude of pro-level movie making capabilities, including:

Sony will also be introducing a Shooting Grip Kit (DSC-RX100M7G), which includes an RX100 VII and Shooting Grip (VCT-SGR1) that allows for easy recording and zooming right at your fingertips; Bracket with Accessory Shoe; and two Rechargeable Battery Packs (NP-BX1). Pair this kit with an external microphone (sold separately), such as the Sony Stereo Microphone (ECM-XYST1M) which mounts onto the bracket’s accessory shoe and allows for a convenient and simple vlogging setup. 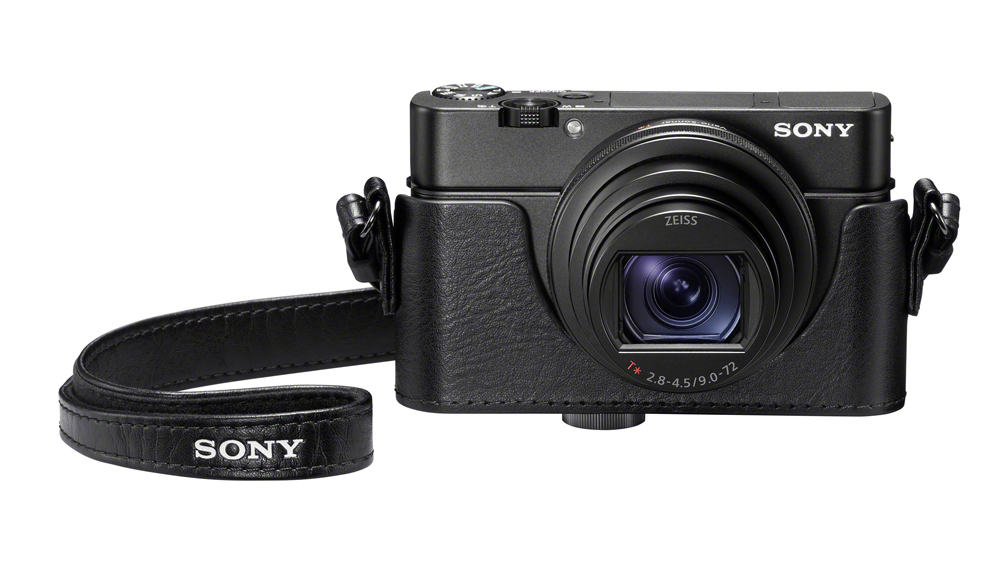 Sony has also introduced a new leather-look body case for the RX100 series (LCJ-RXK), which includes a lens jacket and shoulder strap to protect the camera from bumps and shocks. Available in black, it provides easy access to the microphone jack and USB terminal, which enables charging and image transfers without the need to remove the case.