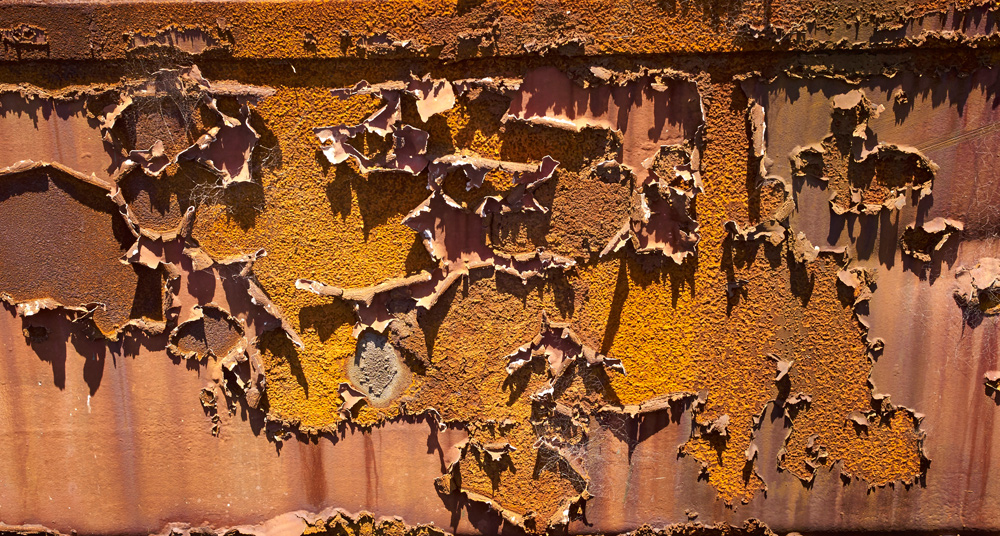 I am as rustaholic. For years, I have been fascinated by the effects of rust on different metal objects and the abstract beauty that comes with it.  If there is something rusty, I have shot it.  From cars, trains, pipes, ships and more, I seek out the beautiful brindle brown color and texture and do my best to capture it with my camera.

In 2005, on my first trip to Antarctica, I visited Deception Island. On this island is an old abandoned whaling station. This station was devastated by a volcano, and pretty much anything not made of metal has disappeared. What buildings remain are in severe states of collapse.  As a whaling station, there were a lot of metal tanks and machinery, and naturally, this equipment is all rusted over now.  ` 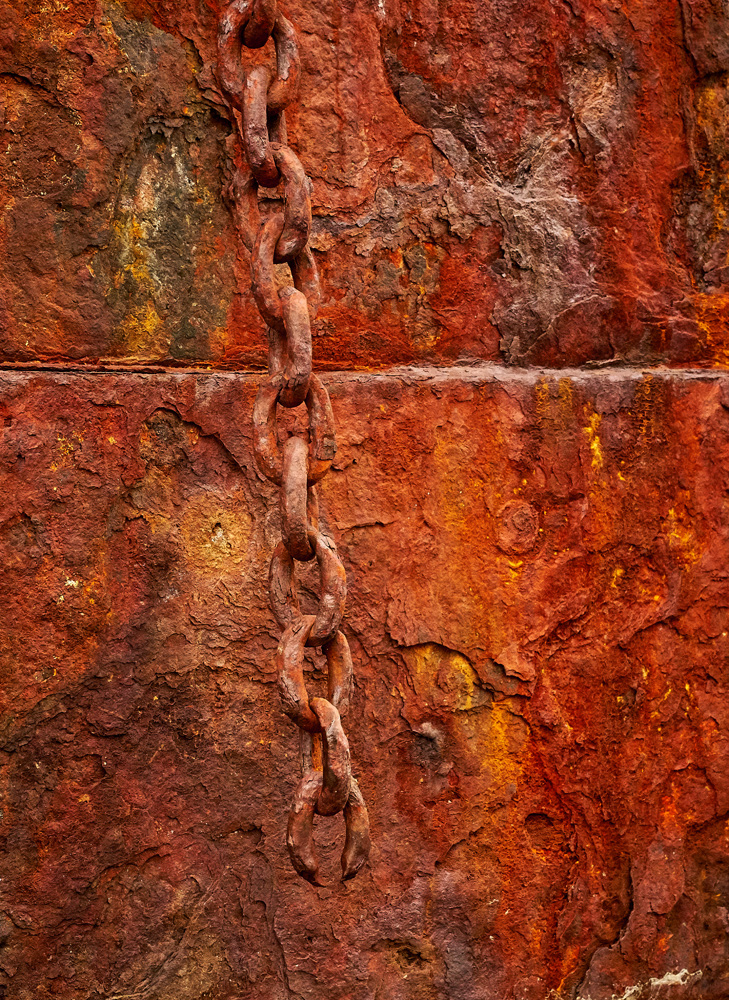 The color of rust in Antarctica is different than rust I have seen elsewhere. There is a unique orange color that catches light in a certain way to accent the texture and shape of the objects it covers. I have been fascinated by it for years and decided that on the trip I was leading to Antarctica in November of 2016 that my focus when possible, was to be the Rust Of Antarctica.

Since June of 2016, I have been shooting pretty much exclusively with the Fuji XT-2 and X-Pro2 camera. I have nearly a dozen lenses ranging from 10mm – 400mm and tele-extenders. My first trip with the Fuji was the latest. The Fuji system was to Iceland. There, it performed well especially with the 100-400mm lens photographing Puffins. I then took the same system to Greenland in August, and it was excellent. The long stabilized lenses, as well as good color and resolution, allowed me to shoot with a lightweight system and do much of it handheld. 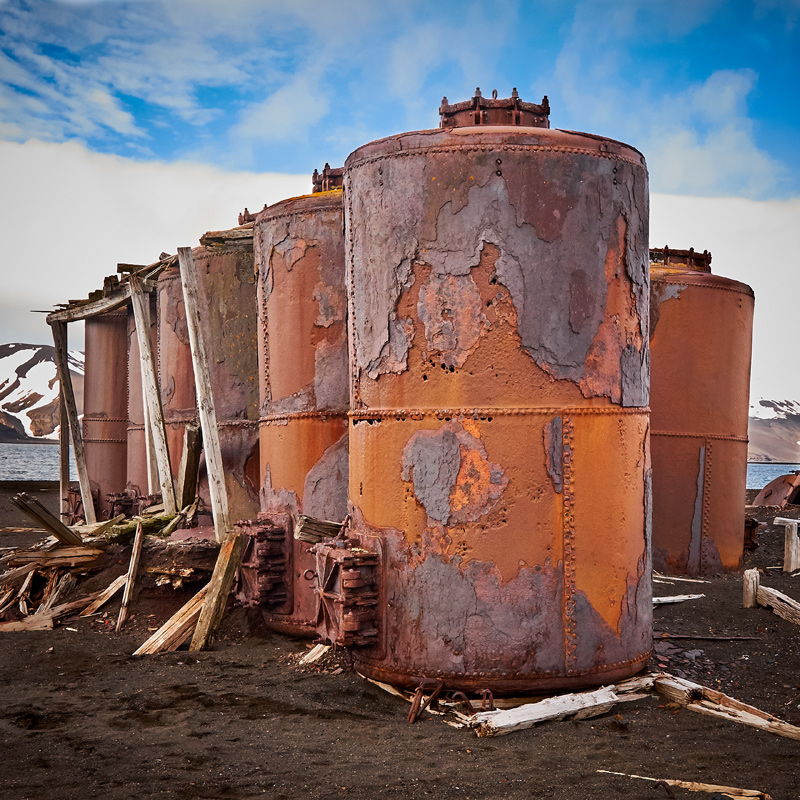 So, after these successes, I decided that I would take the Fuji system to Antarctica for a 22-day trip. The kit fits well into a Dakine 30L backpack and was able to fit in the overhead of any of the numerous flights I took to get there.  The weight of a full XT-2 kit was quite manageable. At the end of the article, I have a list of gear I took on the trip.

I have been to all the locations we were going to visit a few times before and knew what to expect. While I enjoyed shooting wildlife and the most incredible landscapes you could imagine, I was most excited about focusing on any rust I could find. Now, you wouldn’t expect Antarctica to have a lot of rust, but you would be surprised. From abandoned whaling factories to half-sunken ships, there was rust everywhere. 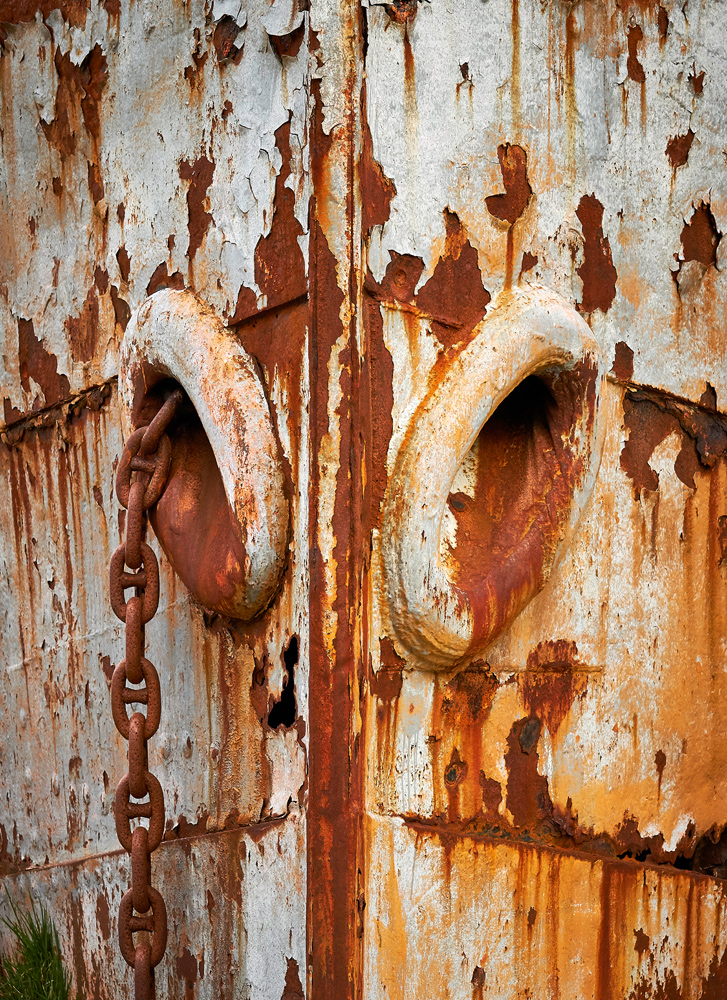 I approached each location a bit differently. I shot the rust in the landscape. This could be buildings, ships, and machinery as part of the landscape. These images portrayed the effect of man on the pristine environment.

I also shot tight shots of the rusty objects. With whale oil tanks, I would shoot from a distance with a long lens and isolate everything but the tanks. I’d use a long lens to compress the scene and would play with exposure; sometimes exposing for shadow and sometimes the highlights. Then, in post processing using Capture One, I would work the shadow and highlight recovery tools along with curves and multiple layers to achieve the look I wanted.

This meant that while shooting, I was also thinking of what I could do to make the shot in some cases more abstract or dimensional. One of the things you’d notice on the histogram is that rust has a way of placing a big hump in the middle of the histogram. I would thus shoot many exposures to move this mid-tone hump to the right or even for some dramatic shots I would move it to the left. I did this knowing what to expect of Capture One in the RAW processing.

Typically, I would take an exposure and go to levels and adjust the levels by starting with auto levels.  In Capture One this remaps the histogram, so the foot of the histogram will be remapped to zero and 255. It is amazing the results that can be achieved by levels adjustment. 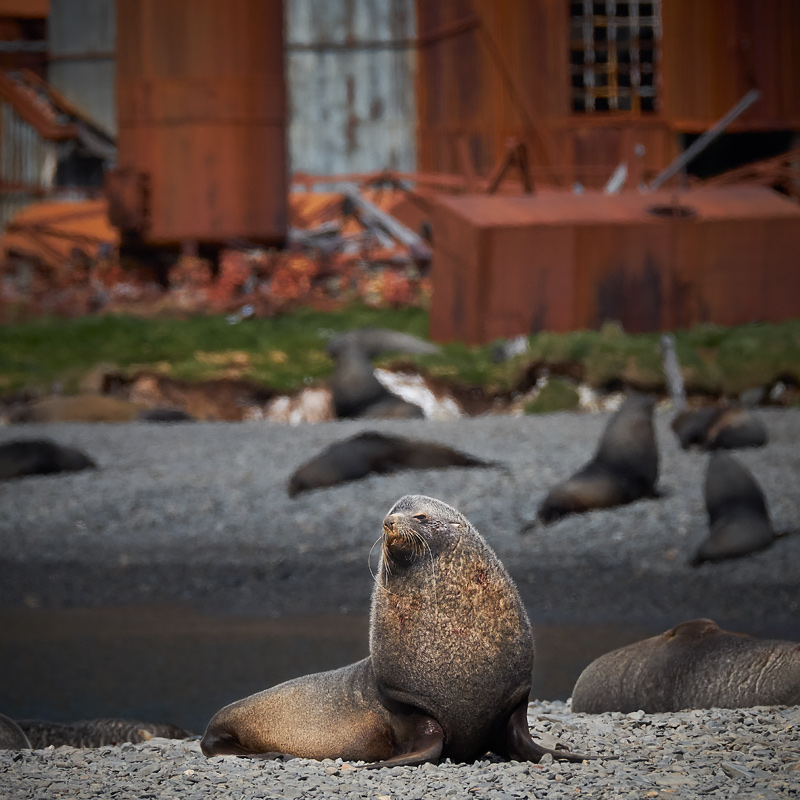 Then, I would play a bit with white balance taking it towards a warmer temperature. This accented the color of rust a little bit. Next, I would decide if I needed to dodge and burn any part of the image. I would use the adjustment layers tool in Capture One to do this. Sometimes, I would use a graduated filter or others; I would paint in with a brush the area I wanted to adjust. For each layer, I could adjust exposure, white balance, contrast, and saturation.

After that, I would do either local or global curves adjustment. I could even adjust the curve of just one color channel if needed. Then I would move over to the color editor and do some selective color editing. I could take a particular color tone and lighten it or darken it or add or decrease saturation. 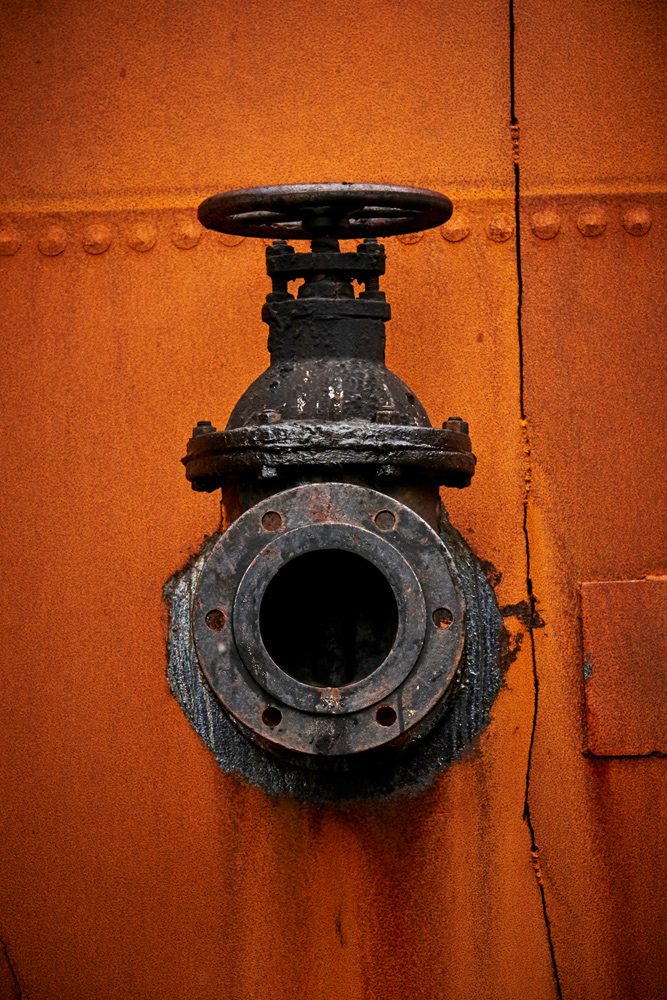 I found it interesting how many photographers could not get into the rust and the opportunities that this provided. I teach workshops all over the world and see so many photographers stuck in a rut. If they are people shooters, they find it very hard to break out and shoot a landscape. Landscape shooters find it difficult to photograph people. Sometimes at my landscape workshops, I make everyone slow down and shoot people in the landscape. I had a very well-known architectural photographer who came on one of our workshops.  When it was over, he said he never felt so good. He commented, “It was so good to see something different and to be challenged to photograph it.”  A few months later I bumped into him, and he said he shoots and sees differently now as a result of doing landscapes. 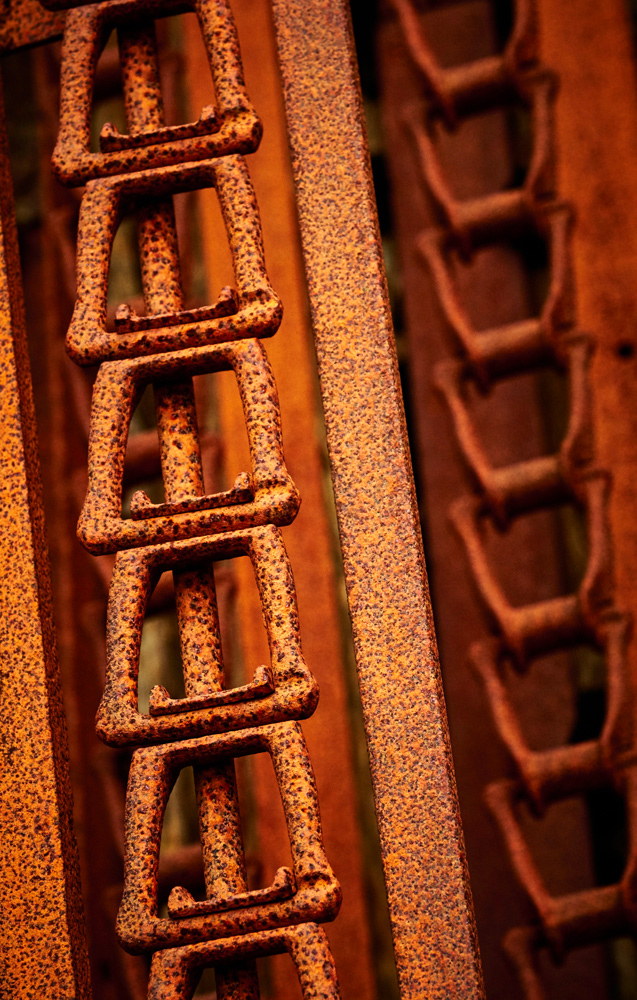 I have been shooting and making a living in photography since 1972. My passion for photography started when I was 12. So, I have been at this for a long time and am very thankful for having the opportunity to have had such a rewarding career. Every day is a new learning experience. My passion for photography still burns strong. What has happened on occasion is I lose interest in a particular subject. Having been to Antarctica so many times, I needed to find something new to reignite my vision. Rust on this trip was it. 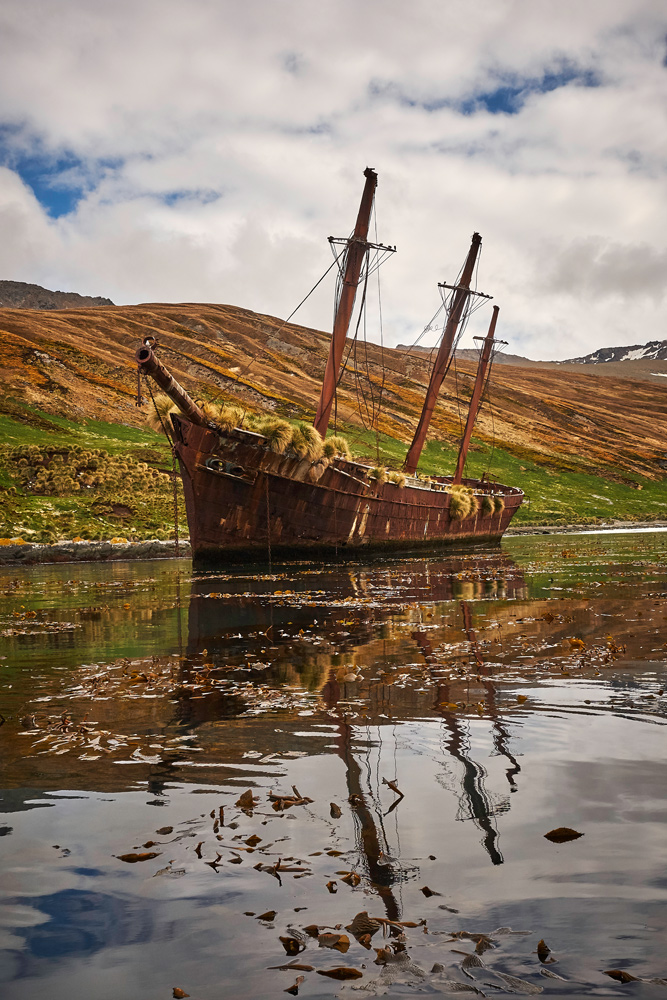 In the end, I plan to publish a Blurb book on the Rust of Antarctica.  It was a good challenge not to mention a very good time.